Too Many Bottoms and Not Enough Seats

​Is there room to add a toilet? 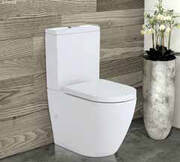 ​The phone rings and it’s Ric on the line.

“Hey Tony, I just rented out the back on room via Airbnb and the boss is not happy that she’ll have a stranger in our part of the house using the bathroom!”“Can we put a toilet in the back bathroom or laundry?” he asked hopefully.

​​“Of course we can,” I said. “If you can stand the pain, I can stand the strain. Shall I grab my quote book and pop around for a coffee to see what we can do?”

We live in interesting times, which is changing the way we use our housing. Grown kids moving back home to save for a new house is resulting in a multi-generation nuclear family, similar to the Japanese and Europeans. Not such a bad thing on some levels.

When I was growing up in Beaconsfield in the 70’s, the average house was a 3 bed x 1 bathroom and so were most of the houses in Nedlands and Dalkeith for that matter. Now, I have clients who have a new baby and add a bathroom which equated to one WC per person!

Fundamentally any room can be made into a bathroom or a toilet. The ingredients are: a space, council approval, ventilation, light, privacy and access to a suitable size sewer pipe and water supply (ideally just outside the wall) plus that most essential element - money!
​
When we operated Cascade Bathrooms in North Fremantle, some of the best bathroom conversions that we did in the Fremantle area were converting rooms that weren’t bathrooms into wet areas. They generally presented you with some interesting spaces to fill, and we had to be super creative to find practical solutions. Small bedrooms became large bathrooms. Large bedrooms became palatial ensuites. A corner of a garden became a tropical outdoor shower (tho one wonders whether the neighbours are still suffering from eye strain!).

As plumbers, we enjoy working on the different compared to the average rebuild of the standard bathroom. In Ric’s case, both the back bathroom and laundry of an 80’s 4 x 2 were good candidates as they were on the service side of the house with sewer running under the paving out side. We removed the vanity and replaced it with a smaller one and supplied and fitted a back-to-wall suite. The job came in at $2100 (re-tiling excluded).

Dreaming is free and so are quotes, so next time you get a case of the ‘what about?’ over coffee, why not put a price to your dreams?