​In the plumbing trade, it’s normal to either quote on work that can be identified and measured, or on a ‘cost plus’ basis, where work can’t be easily identified, such as underground or where there are unknowns. 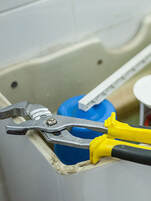 Generally, the greater the unknown, the higher the quote to allow for what might be found. Quoting and estimating is a calculated guess. While the material component is usually pretty straight forward, the labour and unforeseen conditions can be a quagmire! In these cases, experience counts.
So why is this of any importance to you? Well, to quote that canny Brit John Ruskin:

In some parts of the world there is legislation or custom that the lowest price is not to be accepted, as it’s most likely to be a mistake. Japan and Italy are examples. We sometimes get requests here at Youngs Plumbing to repair the work of others, or do condition reports on work that is substandard.

The tradie perhaps should have said: “Sorry made a mistake in estimating”, but instead continues on with the job. I can assure you that no tradesman wants to pick up after someone else and try to make good, and the cost of doing so will be much higher
than normal work.

So my advice is:
​
1. Be crystal clear in your instructions and have a plan/or sketch to show your tradie.
exactly what needs to be done. I’ve been to many jobs where the customer tries to explain the work verbally, which can be a recipe for disaster. It’s a bit like Chinese whispers - the next contractor gets a totally different story from the first one and so on.
2. Document everything. Both customer and contractor are capable of misunderstandings, so keeping a record in writing of all quotes, costs, dates of work seen by both sides can resolve something that could otherwise end up in court.
3. If you don’t understand something, don’t be afraid to ask, ask, ask, or walk away.
4. If it sounds too good to be true - it is!