The Big End of Town

​I petitioned my local Reece store for an update on what’s new and interesting in the plumbing game. I was initially met with blank looks all round…I think that they’re not getting enough sugar! When I prompted them with “what about commercial hot water?” suddenly Alex the assistant manager sprang to life. 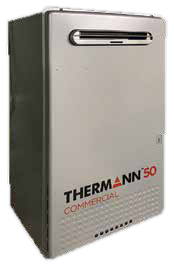 Alex’s suggestion was a Thermann 50lt/min instant hot water unit. You might say ‘what’s so good about it?’ This particular Thermann unit is the highest selling unit of its type in the world, made by Noritz in Japan, who are selling 17,000 of them - more than the combined total of all other manufacturer’s 26 & 32lt units put together!

Up until now in Australia, 32 lt/min units have been the biggest that we could buy on the domestic market, suitable for spa baths and large houses. In the past if we wanted to install a unit to service small hotels, hospitals, schools, or barracks, we would join several smaller units together (manifolding). For example, 3 x 26lt units = 78lt/min.

The average shower head passes 9lt/min, so you’d get around 8 showers. Imagine large hotels and institutions and the amount of water they use - that quickly adds up to a lot of units! We could go for a boiler instead, which is price competitive, but not without its problems. When it stops, there’s no hot water, plus you need a boiler engineer to install. By installing several smaller units, if one stops it’s not a tragedy - the system still works. Better still, the technology is proven and supported in the local plumbing market.

The benefit of the larger Thermann 50lt units is that while we can still join them together, we don’t need so many of them to achieve the same volumes. They can be serviced locally - quickly and cheaply Plucking out a dead unit from a bank of them and replacing it is usually less than an hour’s work. Plus they’re super efficient energy-wise.
​
This unit has to be a winner for the large domestic market and for medium sized commerical operations, where there’s a need for hot water that will never run out ever - we promise!
Note - at 328mj/hr, this unit requires a larger meter than your typical domestic gas meter. Single unit installations start from $5500 inc GST.